In its 15th year British Youth Music Theatre has prepared an explosive summer season of new music theatre! Do you want to be part of it? BOOK YOUR AUDITION NOW!
We are looking for young actors and musicians, aged 11-21, who have a flair for performing and theatre-making. Regardless of experience, we want to meet you!

Following the huge success of the musical adaptation of Tony Macaulay’s internationally acclaimed memoir Paperboy, which took place last year at Lyric Theatre, BYMT is set to bring the musical back in 2019! See all the reviews HERE. Tony Macaulay’s original memoir is a heart-warming coming of age musical drama set against the backdrop of 1970’s Belfast. But Tony’s world is more about Dr Who, the Bay City Rollers and the love of his life, Sharon Burgess, than it is about bombs and bullets. However, the adult world is never far away and we feel the danger on the streets and the immense human power of reconciliation as the women of the Falls Road cross over onto the Shankill holding white paper doves at the Peace Rally in 1976.

Belfast composer Duke Special and writer Andrew Doyle will be adding new material to the show for 2019. The piece will again be directed by West End director Steven Dexter with co-director Dean Johnson who himself hails from Belfast and is an alumni of the company. Dexter was the master mind behind our 2009 production of Loserville and the subsequent West End run at the Garrick Theatre and has created 6 shows for us over the years as well as much else in the UK, Israel and Singapore.

Developed back in 2008-2010, BYMT’s Peter Pan returns bigger and more raucous than ever before in this terrifically modern musical adaptation of J.M. Barrie’s classic tale. This new version will take us back to the magical heart of the story – a place where children become adults and adults become children again. Embark on a journey to Neverland with the boy who never grew up, his trusty side-kick Tinkerbell, his unlikely partners Great White Panther and the Red Indians, and the cunning, cowardly Captain Hook with his motley crew of pirates.

We are absolutely delighted to welcome actress and theatre director Sarah Ingram to the company this year. Sarah brings fifteen years’ experience as an actress to the company, able to impart all her knowledge of comedy and drama from performances in Legally Blonde, The Witches, Sweeney Todd, Follies, Taboo, Flashdance, Guys and Dolls, Showboat, South Pacific, and so much more. She’s full of energy and ideas but is able to approach everything from an actors viewpoint – there’s no better way to learn about the business than from a seasoned professional. This truly memorable family show by popular composer Jimmy Jewell and writer Nick Stimson combines a fabulous pop/rock score, and features the stunning ensemble work for which BYMT has become renowned. Songs include An Awfully Big Adventure, If I’d Stayed at Home with Mother, You Must Believe in Magic and many more, we guarantee you’ll be humming the songs all the way home!

Julia Mosley has nothing. No home, no family, no future. She is a prisoner in Victorian London. A ‘fallen woman’. But when Charles Dickens and Angela Burdett-Coutts set up a house for fallen women in Shepherd's Bush, Julia has a chance to turn her life around. Each girl has a year to transform herself into a respectable, skilled women before being shipped abroad as domestic servants and prospective wives. Which girls will succeed, and which will be thrown back to the streets? This enchanting new musical features irresistible harmonies, exquisite singing and vibrant dance.
P.S. This is a true story.

In October, BYMT launched its New Music Theatre Award for young writers and composers in memory of musical theatre director Vernon Mound. This award gives the lucky winners the chance to have their original work produced by BYMT and staged at a regional UK venue. Our winners this year are Rachel Bellman and Elizabeth Charlesworth. Having wowed the judges with their presentation, they will now be mentored for the next 6 months before putting on a BYMT production of their musical “The Dickens Girls”.

We are also delighted to announce a new production for this summer, Janis Mackay’s 2013 award winning novel The Accidental Time Traveller adapted for stage for the first time!
One ordinary day, Saul is on his way to the corner shop when a girl appears suddenly in the middle of the road. She doesn't understand traffic, or the things in shops, and she's wearing a long dress with ruffled sleeves. Her name is Agatha Black. Agatha Black is from 1812, and Saul needs to find a way to get her back there. With help from his friends, he tries to work out how to make time travel happen.

This show sees the return of Clare Prenton as our director/writer after a few years of absence. Clare is based in Scotland (where the novel is set) but works across the UK most recently directing Shakespeare in large scale festival productions; she has also worked extensively at the Edinburgh Festival and has a long track record of creating new work with young people, not least with us! We’re also absolutely delighted to have David Hewson on board. He is a massively talented composer who specializes in actor-musician work and runs his own very special actor-musician theatre company.

In 2012 Nicola Adams, an apparently ordinary working-class black girl from the Leeds, made sporting and social history at the London Olympics when she became the first woman to win a Gold Medal for boxing.  Since then boxing classes for women have sprung up all around the UK and boxing has become one of the fastest growing female sports. Fight Like A Girl is a new musical asking questions about what it means to be a girl in these fast-changing times when traditional divisons between sexes are becoming increasingly blurred. It wil fuses drama, dance and song with the dynamic physicality of boxing into an utterly contemporary and spectacular new musical. Shan's been fighting all her life. Fighting the world around her. Fighting herself. On release from a Young Offenders Institution she returns to the streets where she grew up. She recognises Zoe, her best friend when they were young girls. Zoe takes Shan to the boxing gym and Shan's life changes. Shan is a natural. A born boxer. So begins Shan's journey. Along the way, quite unexpectedly, for the first timme in her life, she falls in love.

The team will be headed up by writer/director Nick Stimson who has created five shows for the company. Nick is Associate Director at Plymouth Theatre Royal and is currently writing the 400th centenary celebration of the Plymouth Brethren’s emigration to the US for the cities of Plymouth/Boston. Composer James Atherton has made a stunning electronic score for the show in between his recent work for the BBC, the New Vic, Stoke on Trent and Selladoor productions.

A new musical set in a dystopian world, this time where all the insects have died, fresh produce has disappeared and humanity has to live on tinned food. Those stealing from the Food Mountains are captured and restrained in gigantic prisons – we see the prisoners expressing their frustrations and struggling to escape beyond the city walls to a place where they believe they can rebuild the farms and grow food once more.
As with all these projects the movement will be largely devised with the company led by expert facilitators. The company will explore the themes and find ways of expressing the powerful emotions released. As well as the musical themes we will be creating new soundscapes as background to the action, often through sampling sounds made by the company. We will experiment with new ways of amplifying the singing and surtitling the show with projected screens.

Dance Connection 5 is led by the same phenomenal creative team who made No Man’s Land. Movement is one of the most powerful ways to connect and communicate and Rachel Birch-Lawson, an independent dance practitioner, specialises in telling stories through dance theatre Rachel will herself be supported by longtime collaborator, strength and conditioning expert Khyle Eccles, who will act as rehearsal choreographer as well as sorting out all those hidden injuries to which dancers are prone. Musically the project will be led by composer, percussionist and soundscape artist Nicola Chang currently a member of the STOMP! Company. As well as dance and drumming, Nicola loves musical theatre and will no doubt help the company wind down with an end of day sing-a-long of MT standards!

Do you want to be part of BYMT's 2019 cast and star in one of our eight brand new musicals next summer? BOOK YOUR AUDITION NOW 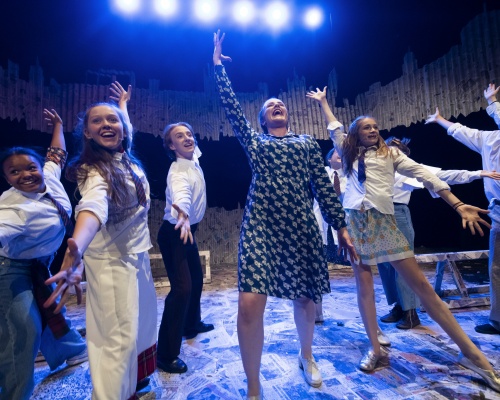