Creativity is at the heart of our work and we receive support from Arts Council England as a strategic arts organisation to develop new music theatre. Each year we create at least EIGHT brand new full-scale productions across the UK and Ireland with over 300 young people.

We pride ourselves on working with some of the most exciting and respected theatre practitioners in the industry, drawing on a wealth of experience from commercial West End theatre, the National Theatre, the RSC, regional repertory, experimental and fringe theatre.

This commitment to new music theatre means that we have a wealth of shows that are ideal for schools and amateur groups to perform All our shows have multiple main parts and named parts for 32-40 performers.

We are gradually agreeing licensing packages with our writers and hope to offer a large range of musicals to perform in the coming months.

The current costs for a license for the BYMT shows listed below are: £100 per performance or 10% of box office whichever is higher. That's it! We provide you with everything you need as pdfs and you print what you need.

At present we have the following shows available to license:

Peter Pan tells the classic J.M. Barrie tale of a young boy who refuses to grow up. This fan favourite show is filled with magic, delight, and just a fairy dusting of heartbreak. In 2021 BYMT revived its production with updated scripts from the writers designed to address sensitivities over the use of some dialogue associated with American Indians. Now you can embark on a journey to Neverland with the boy who never grew up, his trusty side-kick Tinkerbell, his unlikely partners Great White Panther, the indigenous peoples of Neverland and the cunning, cowardly Captain Hook and his motley crew of pirates.

BYMT's most recent production took place in the Great Victorian Riding Stable at Powderham Castle in Devon. Links to photos and videos from the production are below. All performances of Peter Pan benefit Great Ormond St. Hospital Children’s Charity, who hold the rights to this work in perpetuity – this was the wish of J.M. Barrie.

There are 24 named parts plus a chorus of Pirates, Indigenous People's of Neverland, Nannies, etc, so plenty for even the biggest cast: Cast Breakdown

‘PETER PAN’ is based on JM Barrie’s most successful Peter Pan story - ‘PETER PAN AND WENDY’.  It’s the one everyone knows.

This is comic musical with moments of powerful drama.  It’s not a pantomime. Characters need to be played truthfully and fully. It inhabits a completely ‘other world’ where different rules apply. The musical allows the director plenty of freedom to create his or her own world.

The characters have the edge that Barrie intended to them have.  Peter is charming, clever, quick-witted and sometimes cruel. Tinkerbell is a fairy with attitude. Hook is as dastardly as they come.

At the heart of this wonderful story lies a terrible truth - we will all leave childhood behind us except for Peter Pan, who can never escape.

Reaching into the dark heart of the terror, but with an added and unexpected twist, writers Nick Stimson and Jimmy Jewell have created a superb new production which places the classic story against the chilling background of a Geneva freak show in the early nineteenth century.

Murder, horror, loss of innocence and an unstoppable voyage into the darkest recesses of the human soul overwhelmed all those involved as they experienced the final desperate journey of Victor Frankenstein as he attempted to hunt down his nemesis in the frozen wastes of the far north.

Frankenstein is the most famous of all horror stories. For two hundred years this classic tale has fascinated and intrigued readers.

Loosely adapted from the famous novel of the same name by Mary Shelley, this music theatre production, set in the early part of the 19th century, reflects the high passions, ideals and fevered imagination of that glorious romantic age. The musical tells the story of Victor Frankenstein, a young, brilliant and driven scientist, who is obsessed with the desire to create human life out of dead matter - to bring the perfect human being into a world that is corrupt and far from perfect. Frankenstein assembles a Creature from body parts and brings the Creature alive. But the Creature is more than a collection of body parts and demands that his creator shows him love. Unable to do so, Frankenstein rejects the Creature and so begins a terrible story of betrayal and revenge.

There are 28 named parts plus a chorus of crowd, dancers and villagers, so plenty for even the biggest cast: Cast Breakdown

Although the musical is adapted from the Mary Shelley novel the story has been edited and tweaked to maximize dramatic impact. Some new characters and scenes have been included but the essence of the story remains as Mary Shelley intended.

FRANKENSTEIN is about damnation and salvation. It is an early form of science fiction where a scientist, a dangerous and unknown breed at the time, has the audacity to create life. When Victor Frankenstein realises what he has done he is appalled and shocked. When the Creature he has created, a perfect human being, innocent and angelic, asks to be loved, Frankenstein’s reaction is to try to destroy his own creation. The result of his actions turns the Creature from innocence to a terrible destroyer of life.

The popular image of Frankenstein’s Creature is of a deformed, stitched and roughly put together monster. In her original story Mary Shelley made the Creature perfect in all ways. The same applies to the musical. The horror must come from within.

The musical has many characters and can be played by a company as small as twenty or as large as required. Doubling and multi-role playing works well.

All the company need to be good movers. There are some specific dance moments in addition to stylized movement.

Help! Get me out of this Musical - John Nicholson & Alexander Rudd

Teenage life is full of its ups and downs, and hell-raiser Callum certainly makes sure of that. But one morning the ultimate school bully, wakes to find, to his growing horror, his entire world has been turned into a musical! Trapped, with no escape, in a world where people break into a song and dance routine at the slightest provocation, where no-one ever looks him in the eye because they're too busy turning out front!

Help! Get Me Out of This Musical takes us on a beautiful and bonkers, pop-rock journey of social discovery, holding a mirror up to relationships, families and society. This devilishly droll musical written by John Nicholson is packed full of toe-tappingly catchy music from award-winning composer, Alexander Rudd.

There are 32 named parts plus a chorus of students, bank clerks, patients etc., so plenty for even the biggest cast: Cast Breakdown

In a small 21st century UK market town that lies on a river, with beautiful rolling hills all around it, a young boy of 11, Saul is striving to be - just a regular kid.

He has pesky twin siblings, great mates, a secret den, evil foes (Crow’s gang) and a healthy love of Jaffa Cakes. Everything is kind of OK, until a young girl lands in his lap and claims to be from 1815. Her name is Agatha Black and she’s time travelled from 1815.

She decides only Saul can get her back. Saul is confused but has many questions – is she for real? Can you time travel? If so, how? And how can he get her back before Christmas? What will his mates think? And is it possible to hide a time traveller from your parents and school teachers?

With Saul’s help Agatha is able to time travel back to 1815, but not without leaving her mark on him - forever and equipping him with the skills to become a time traveller himself.

Adapted from Janis Mackay’s award-winning children’s book, THE ACCIDENTAL TIME TRAVELLER is a magnificent new musical for all the family, full of hilarious misunderstandings, gripping action and spellbinding music.

All that glisters is not gold...

With its boisterous and exciting Commedia dell'Arte style, Fool's Gold tells the tale of a father trying to marry off his wayward daughter, an inventor attempting to become an alchemist and a bitter servant plotting revenge.

Written and directed by Gerry Flanagan, an experienced practitioner in clowning, who has worked with Theatre de Complicite and the David Glass ensemble, and composed by Annemarie Lewis Thomas, Principle of the Music Theatre Academy in London, this frenzied and fun-filled show promises to be one not to miss.

There are 11 named parts plus smaller parts for servants, townspeople and beggars; so plenty for even the biggest cast: Cast Breakdown

Join the fight for freedom, but trust no-one...

Enter a dark, dangerous world where knowing your place is the most important thing. The Midnight Flower Press follows the journey of a heroic group of young people who use a secret printing press to fight against the injustice around them during the Industrial Revolution.

If you are interested in performing a BYMT show, please complete our Amateur Rights Request Sheet.

For more details please get in touch with Milly Summer, millysummer@bymt.org. 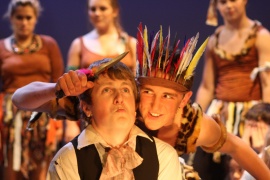 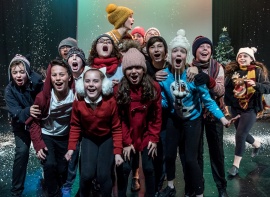 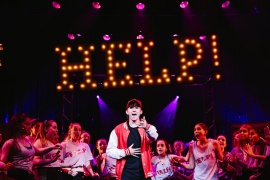