In its 10th year British Youth Music Theatre has prepared an explosive summer season of groundbreaking international work in England, Scotland and Northern Ireland. Strap in as we give you the breakdown of the shows, merchandise and competitions you can expect to see appearing over the next few weeks!

Follow our new Instagram channel to get sneak peek into the rehearsals of our upcoming shows, a unique insight into the creative workings of BYMT and the inevitable office selfies.

Over the next few weeks we’ll be running regular competitions where BYMT members will have the chance to win exclusive merchandise, goodie bags and theatre tickets.

We will also be launching our ‘7 Second Musical’ challenge! Where we’ll be seeking out the smartest, funniest or maddest way to tell the story of a popular musical in 7 seconds. More information to follow soon!

We’ve got a brand new range of BYMT hoodies, T-shirts, badges and much more for you to get your hands on!

This July the thumping sound of Drum ‘n’ Bass cascades down the corridors of Dunsinane. An ominous beat reverberates through the dank fog of BYMT's dystopian reimagining of Shakespeare's perennial horror story Macbeth.

Utilising Garth McConaghie’s fierce electric score alongside Stuart Harvey accomplished direction, the young cast bring a new twisted take on the things that could conceivably go bump in the night.

Harvest Fire ignites an explosive fusion between the spectacular energy of America's Burning Man Festival and Scotland's own harvest celebrations. Within this vibrant collision of traditions the boundaries between death and re-birth are tested with visual relish.

Harvest Fire is a crackling new work created by director Lewis Barfoot as part of the Aberdeen International Youth Festival.

The Dance Connection is a vibrant devised performance, combining breathtaking choreography, mesmerising movement and immersive vocal soundscapes. The score steps light-footedly between captivating classics to pace-pumping pop, with the invigorating infusions of Gaelic song and jazz.

All these elements are intertwined to create an intricate and spectacular tapestry of movement and sound not to be missed.

The first of BYMT's new Triptych Programme, commissioning new work from young female composers, Triptych (2014) gives young performers from BYMT auditions the chance to work with some of the most exciting and innovative emerging composers in the UK and from abroad.

The programme brings together three emergent female composers from around the world. The template for this groundbreaking new work comes from the poems of one Northern Island's foremost female writers, Sinéad Morrissey.

This is a chance for young women to experiment with cutting-edge musical theatre, devise new work and explore what it means to reach womanhood in the 21st century.

Launching a major international collaboration, BYMT will be developing the stage version of the international bestselling book Ali & Nino. The story remains a testament to the strength of love in a war-torn world.

The performance will be a multilingual maelstrom of Georgian polyphonic singing and Persian mugham. Performed by a talented international cast; this promises to be one of BYMT’s most ambitious projects to date.

A new, dangerously addictive music has entered Discworld! Performer Imp Y Celyn (literally translated as ‘bud of the holly’) finds himself the unwitting poster boy for this intoxicating trend. We follow Imp and his eclectic ensemble through their glamorous yet short lived musical career, as they attempt to harness the new ‘Music With Rocks In’.

Not the End of the World

In Geraldine McCaughrean’s award-winning tale a frighteningly zealous and single-minded Noah, battles against the apocalyptic elements. Family conflicts, stowaways and rogue reptiles combine to craft a captivating storm-forged story bound to leave you gasping for air.

We hope to see you all there! 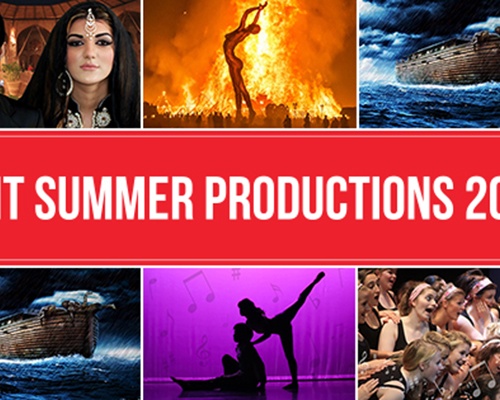