A reflection on #BYMT2016 by Jon Bromwich

I love the last bank holiday weekend of August: the culminating weekend of the BYMT season. It’s a chance to look back on a wonderfully intense, inventive and imaginative collection of new music theatre. This year, down in Plymouth, there was a real Bank Holiday pearl in the form of The Legend of White Bear Lake, a beautifully lyrical work set in the forests of North America. Somehow it seemed fitting that the approach of the autumn, the new school term, would be marked by a work celebrating the seasons and the ever changing patterns of human and animal life.

Before that we had some our best ever reviews for The Dark Tower at the Bussey Building in Peckham:

This is probably the biggest musical theatre event of the year…It is exhilarating. It is startling. It is also the boldest, most original score you will hear this summer, apart from Andrew Lloyd-Webber’s 1970, ‘Jesus Christ Superstar’. This incredibly wonderful work deserves the close admiration and encouragement of all arts organizations who want to support and be a part of the most exciting development in musical theatre in this country in years. We need to try and catch up with the awesome pace that BYMT is setting. Read the full review.

That ‘awesome pace’ included the new Busted musical What I Go to School For at the Theatre Royal Brighton featuring some truly breathtaking performances – watch this space for the next generation of BRIT award and Olivier winners. The show is already optioned for professional development and we expect to see it on the West End stage at some point in the future...

In Trojan Women we tackled asylum stories, women escaping war and abuse, and took Theresa May to task for her attitudes to immigration. Also exploring serious matters, we looked at how female boxing can become an outlet and catharsis for the frustrations and energies of damaged youth in Fight Like A Girl - perhaps not the usual fare of musicals - but important nonetheless and an antidote to the vacuity of much commercial musical theatre. Fight Like A Girl, which was performed at the textile factory Sunny Bank Mills, also garnered five-star reviews.

In MAELSTROM we explored - through a devised rehearsal period - the deep bonds between Scottish and Norwegian legend and music while in The Frenzy of Sweeney we modernized an ancient Ulster legend transforming it into a drama on the streets of Belfast.

Every year we ask Trinity College London to assess our work under their Musical Theatre in Performance certification and this year was no exception to the rule that every BYMT production received a Distinction at Grade 8 – the highest available before BA or Diploma qualifications. Indeed, one examiner commented that the production she saw displayed a group of mostly 14-19 year olds working at Diploma and Post graduate level. Most astonishingly, our production of The Great Gatsby received a remarkable score of 99/100 – just part of that ’awesome pace’ that the BYMT Company is setting.

And the Trinity assessments are mirrored on our Summer Skills Courses where Distinctions at Grade 6 are the norm. Over 200 young people took these courses in 2016 and, along with our After School Clubs, it’s an area of growth and innovation for BYMT.

Each year we ask 300 young people to set the bar high and achieve the (almost) impossible – the highest quality productions rehearsed in ten-hour days with a creative intensity unparalleled elsewhere in the world of theatre training. We ask our young people to take part in a process of making new theatre with the best practitioners in a way that no other organisation can match.

There are too many people, places and things to thank individually here but this summer we asked over 150 creative, technical and pastoral staff to join us and make the BYMT 2016 Summer Season of New Music Theatre happen. Thanks to all of them and also to those who came to watch any part of our great creative festival. We are continually amazed by the support and dedication from parents, carers, teachers, families and friends and we are so grateful for all your efforts in making the summer possible.

Thank you and we look forward to working with you all again next year! 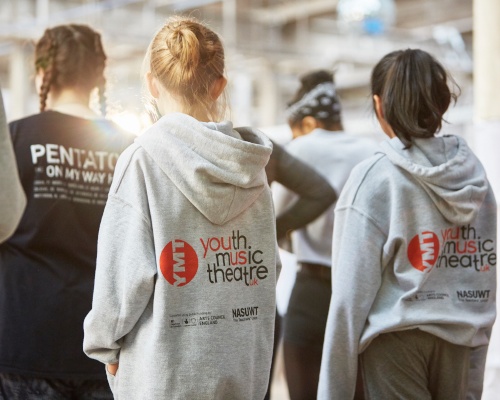