“The first lady MUST be a leader. She must not be a follower”- Oleg Cassini.

First Ladies is a celebration of women though out history featuring characters that have broken out of the male shadow they were thrust into and have shone beyond expectations.

This brand new musical brings together and celebrates an important, often overlooked, surprisingly contemporary group of first ladies, shedding light on important questions about leadership, civil rights and women’s position in the world.
Elizabeth Charlesworth (composer and musical director) has always been intrigued by this specific league of woman; from different places and times, these ground breaking achievers supply a plethora of stories, scandals and narratives that feed the creative mind.

What is First Ladies About?

The main message behind this story is that ‘it pays to persevere and be tenacious’, especially if you are a woman. Be proactive, work hard, don’t listen to niggling, negative voices and you can get there- where ever you want to be.
What is especially important about this production is to remind the audience that these historic heroines and political figures were human too.

Why is this project so important?

Elizabeth is especially passionate about this project; “the notion that there can still be ‘firsts’ for women is a sobering indication of women’s continual struggle for equality”. In the male dominated musical theatre industry, Elizabeth is especially proud to be writing this song cycle for an all-girls cast.
The intent for the project is for the cast to explore ideas of feminism and equality and if this inspires the cast to create change in ANY industry as they choose to go into, then it will be a success, “their championing of the next generation of performers is vital”.

“As a composer I aim to push the boundaries of traditional musical theatre. YMT shows are not populist or commercial; they push boundaries and allow their creators to do the same. I can honestly say I would not be where I am today without them. Their ability to commission challenging works is fantastic; in my opinion, no organisation is more important to the future of musical theatre than YMT."
This production is not just about gender inequality, but the cuts that the arts are facing are making the careers of emerging writers treacherous and sometimes impossible. Elizabeth credits YMT as her creative lifeline. “Their faith in me as an artists and their active contribution to bringing to life new pieces of musical theatre is priceless”.

Nikki Racklin (Book & Lyrics) intends to offer the audience an uplifting and entertaining experience. Opening the audience’s eyes to some of history’s lesser known heroines, as well as those globally celebrated. What she particularly hopes the achieve is to inspire the female audience members to walk away excited and empowered.

Some background information about some of the creatives working on First Ladies:

Composer & Musical Director – Elizabeth Charlesworth: A composer, orchestrator and arranger based in London, Elizabeth trained at the University of Nottingham, graduating with a First, and has since worked to create new works for the stage and beyond. Elizabeth was trained as a Youth Music Leader with City Arts Nottingham and has since written extensively for music and education in commissions for the City of Birmingham Symphony Orchestra and Nottingham City Council. Her recent project is a miniature song cycle for Nottinghamshire primary schools based on Nick Cope's The Art of Being Brilliant. 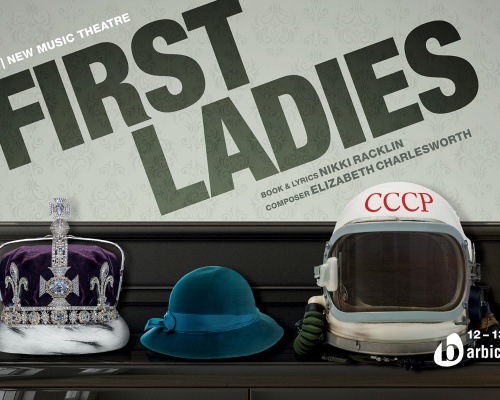