It’s been eighteen years to the month since we set up the first project for BYMT (then YMT UK). It was a small outreach project in Norwich and from that small acorn a large tree grew. Last year, despite the pandemic, we produced our largest ever Summer Season of New Music Theatre: 11 new theatre productions, 11 Summer Camps and a range of auditions and outreach activities. Almost 700 young people were in the summer season alone and over 200 freelance staff ran the courses.

As well as producing new music theatre across England, we have also created work every year in Belfast and Northern Ireland, culminating in productions of Gulliver's Travels and Tony Macaulay's Paperboy. In Scotland, we have performed for many years at the Aberdeen International Youth Festival and at the Edinburgh Festival. We have yet to make inroads into Wales but gaps in our programming always offer opportunities for the future; and we have welcomed many young people from our auditions in Cardiff. Equally we have always harboured ambitions to take British youth music theatre overseas - another future opportunity.

It seems a good time, therefore, for me to make the decision to step down as Executive Producer of British Youth Music Theatre and make way for the next generation to take over. This is the time for a new person with a strong team to take the company onto the next stage. We are delighted that Emily Gray becomes the new Artistic Director and CEO from 3 May 2022. Emily joins us from Mercury Musical Developments where she was Director and, prior to that, Trestle Theatre Company where she was Artistic Director.

I shall be leaving at the end of April once our Easter season is over, although returning to see some of next summer’s productions which I will have programmed in advance.

It’s been a heady dance over the last eighteen years. So non-stop that it feels only a moment ago that we were heading up to Norwich to meet the first bunch of teenagers in a school hall. Since then we’ve managed to get one show into the West End as a fully-fledged professional production (the only youth theatre to have done so) and got an Olivier nomination; taken other shows to the Edinburgh Festival; performed in castles, on hillsides and in old factories; worked with Terry Pratchett and Michael Morpurgo; made a film; and created shows which no-one fully understood, but everyone loved.

We have discovered just how much extraordinary talent there is within young people, talents which sometimes they didn’t know they had. We have asked our freelance staff to do things they thought might not be possible but which led to some extraordinary performances and creative ideas.

I wouldn’t have missed the past eighteen years for anything; and I will be looking forward to seeing the next generation of new writing from the auditorium and not from the producer’s chair. 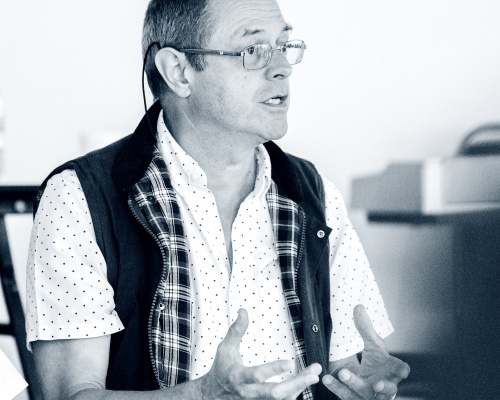