19 years ago four planes bound for California were hijacked. Two flew into the World Trade Towers, one into The Pentagon, and a final flight crashed into a field in Pennsylvania following the heroic actions of its passengers attempting to foil the hijackers. The September 11 attacks were the single deadliest terrorism incident in history, responsible for 2,977 fatalities.
A few months prior to these attacks, on the 2nd June 2001, a removals man/carpenter first set up camp opposite the Houses of Parliament to protest against war and foreign policy, especially in regards to the sanctions against Iraq. Brian Haw remained camped out on Parliament Square for ten years.

'According to Brian Haw' is a show that was written by James Atherton and Sarah Nelson, based on a concept by Eddie Latter. Originally workshopped by BYMT as a Studio project in 2005, it was then performed at the Barbican Theatre, Plymouth in 2009. The show then also received a subsequent revival in 2012 at Square Chapel Centre for the Arts, Halifax, with direction by Ellie Jones, before transferring to Riverside Studios, Hammersmith in 2013. The show examines the life and politics of Brian, particularly in regard to the impact that the 9/11 attacks and further developments in the wars on Iraq and Afghanistan had on his protest. It explores the impact that Brian's protest had on his family, as well as also looking at the wars in Iraq and Afghanistan and 9/11 directly, and the impact that these events have had on the world.

2021 marks the 20th anniversary of the September 11 attacks, and it also marks the 10 year anniversary of Brian's death. For this reason, we have decided to launch a new project; the Brian Haw project, with an aim to raise awareness of Brian's work, through the use of songs and stories from the show. This kicked off on September 11th 2020 with the launch of the newly-recorded opening number from the show; performed by reunited cast members from our 2009 and 2012/13 productions, as well as Brian's son Pete Haw, whilst socially distanced during lockdown, and edited together by composer James Atherton.

As a continuation of this project, we will be recording a number of other songs from the show over the coming months, in order to put together a virtual concert edition, before hopefully being able to come together in person for events in 2021.

Our broken-hearted whisper will start so small. But we'll be shouting, we'll fight for:
Peace, Love, Justice for all.

The opening number 'Always Remember' can be viewed on our YouTube channel, as well as clips from our 2010 performance at the NASUWT Annual Conference, and from the 2012 production. 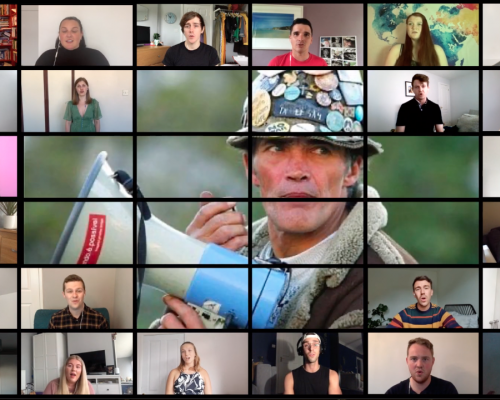