Award-winning writer and Associate Director of Theatre Royal Plymouth, NICK STIMSON, chats with us about BYMT's new musical FIGHT LIKE A GIRL, which will premiere at Dean Clough this summer.

We're looking for a group of young people who aren't afraid of a real challenge and want to tell a compelling contemporary story in a contemporary way. It's going to be a physically and emotionally demanding show with members of the company learning how to box and all will be heavily involved in the creative process -  so, if you haven't already, you should book your audition and come join us.

Fight Like a Girl is the story of Shan and her younger sister Jess. Shan’s been fighting all her life. Fighting the world around her. Fighting the system. Fighting herself.

Aged just 12 and 10, Shan and Jess are removed from their abusive home by Social Services and placed into care. Once in the system the two girls lose contact with each other as Shan is moved from foster home to foster home. Each failed attempt to settle ignites Shan's aggression and a reluctance to trust those around her. Shan’s overriding wish is to be reunited with her sister but, unable to control her anger, Shan finds herself locked in a Young Offenders Institution: the end of the line. In her cell her rage consumes her and she vows to take revenge on those who have hurt her.

Back on the streets Shan encounters a group of discontented young people. Among them she recognises Zoe, a friend from the past. Zoe takes Shan to a boxing gym and suddenly Shan’s life changes. Shan's a natural. A born boxer. A real talent as a fighter. Talent enough to go to the top. So begins Shan’s journey to being a champion. Along the way she is reunited with her sister and then, quite unexpectedly, for the first time in her short life, Shan falls in love...

Every character in this show, female and male, will have a complete journey. It’s a hard-hitting show in more ways than one, full of street dance, up-tempo music, heart-breaking story and comedy, but at its heart, it's a story about love.

Why should people get involved with BYMT?

Being involved in a BYMT show is the experience of a lifetime. It is very demanding but at the same time incredibly rewarding. To be involved is to shape new musical theatre. Company members will work intensively and will learn a wide range of new skills. They will also be working directly with musical theatre professionals and will discover they are not patronised but challenged to deliver performances of the highest standard.

Go and see the great musicals. Sweeney Todd, West Side Story, Oklahoma! etc. Go and see any musical - even if it’s terrible you’ll learn something.

A warn and deserted island miles from a phone.

I’m from Devon, the home of the scone. (As in ‘gone’. Anything else is wrong.) Also it’s cream on first followed by the jam.

If you want to take part in FIGHT LIKE A GIRL or one of our other seven shows in the BYMT 2016 Season, book your audition NOW! 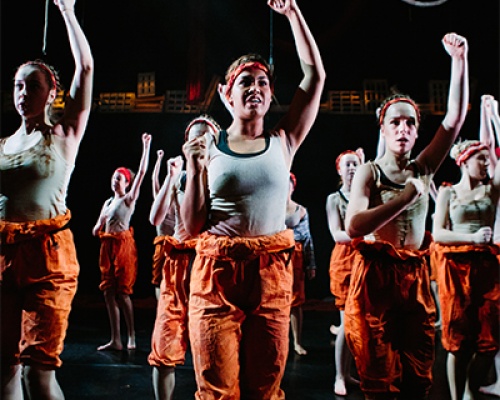