Although 40 days and 40 nights of rain sounds like a typical British summer it was evidently more of a big deal in biblical times! But with the theme of climate change looming over the world like a tidal wave this biblical tale has caught the imagination of both BYMT and those on the sun scorched hills of Hollywood.

BYMT’s Not the End of the World is a brand new interpretation of Noah’s mythic story based on the novel by Geraldine McCaughrean, winner of the Whitbread Children's Book Award (2004). Told from the perspective of the Ark’s animal cargo this is a bold adaptation of the brutal saga.

With Darren Aronofsky’s Noah being released yesterday it feels like the perfect time to decide once and for all whether Hollywood or BYMT hosts the best apocalypse!

Filming for Noah began 20 months before its release this April. Not the End of the World will be devised and performed in just 2 weeks this August. Get it together Hollywood!

The budget for Noah: 125,000,000! Budget for BYMT: 40,000x less. Is their ark made of gold? Personal champagne fountains for all the elephants? You could put all the animals on a luxury cruise for that and still have money left over to give Russel Crow some much needed singing lessons.

Crow and Aronofsky have been hounding clerics in search of a religious endorsement for their new film. The pair stopped just short of carjacking the Popemobile.  They may have the Archbishop on their side… but we’ve got Ed Sheeran.

Ed Sheran: "At BYMT I realised I love performing. Audition NOW - just go for it!"

Christian Bale and Michael Fassbender were both offered a role in Noah, but they declined due to scheduling conflicts. Conversely both actors applied to BYMT’s Not the End of the World, but we were forced to turn them down due to the age restriction.

Crow’s grim prehistoric sailor would undoubtedly have been cheered up with some rousing sea shanties. But alas it was not to be. Whereas BYMT knows that when an apocalyptic quantity of rain pours down, sometimes all you can do is…

So round up your neighbourhood’s household pets, an apocalyptic quantity of animal feed and join BYMT this August for an unforgettable voyage to the end of the world and back. 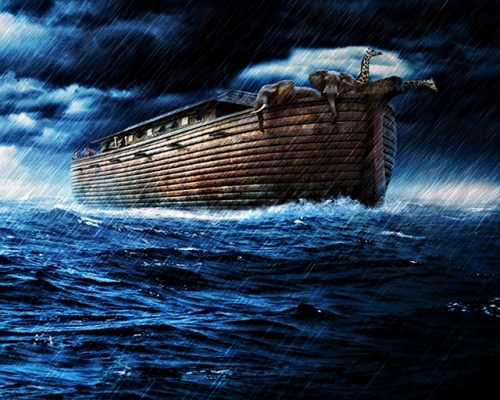