We are proud to have a long standing relationship with the UK’s largest teaching union, the NASUWT, who are our principal donors.

The NASUWT is the largest teachers' union in the UK. It organises in all sectors from early years to further education and represents teachers in all roles including headteachers. The NASUWT's philosophy of putting teachers first means that they will campaign on behalf and support and represent teachers to ensure that they are recognised and rewarded as a highly skilled professional and have working conditions which enable teachers to focus on their core role of teaching, leading teaching and learning. The NASUWT has enjoyed a long affiliation with BYMT as principal donor, supporting young people's creative and personal development through the medium of music theatre.

“The NASUWT is deeply committed to causes which benefit, support and celebrate the talents of young people. The Union has developed its relationship with British Youth Music Theatre (BYMT) over a number of years. BYMT is an extremely valuable resource for teachers and schools, providing the highest quality productions and development opportunities. The NASUWT is very proud to be the main sponsor of BYMT.”

"As President of NASUWT the Teachers Union I have had many heart-warming experiences, none more so than when I saw the British Youth Music Theatre performance of Jabberwocky. The young cast had transformed, perhaps the most famous English nonsense poem through their talented performances, into a magical tour de force. Talking to those involved brought home firmly to me the importance of music, drama and the arts and how this charity makes a massive impact on those youngsters through their workshops, summer camps and solidly professional productions.

I am so proud that the NASUWT are able to support this charity. The performances are worth seeing; their camps worth attending and their impact on young lives staggering. There are far too few ways for youngsters in state schools to get good drama experiences this if not the best is one of the best."

With Phil Siddle, an NASUWT official, as one of BYMT's trustees, the two organisations work in partnership to ensure that as many young people as possible are able to access quality music theatre training. BYMT professionals assist the NASUWT on their NQT support scheme and on top of their generous yearly donation, NASUWT work with BYMT on training, conferences and marketing to schools.

"Our collaboration with Chris Keates and the staff at the NASUWT has been one of the most longstanding and fruitful anywhere in the arts education world. Over twelve years, their support has enabled the development of the charity, extending its reach to every corner of the UK and ensuring that children, from all walks of life and economic backgrounds, have enjoyed the benefits of an intensive creative arts  programme. Through them we have built a supportive group of Teacher Ambassadors and made some wonderful pieces of theatre – the largest catalogue of new music theatre anywhere in the world."
Jon Bromwich, Executive Producer, BYMT 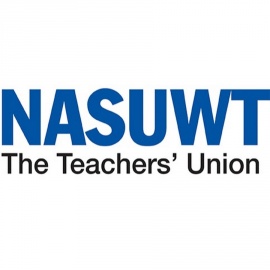 “The NASUWT is deeply committed to causes which benefit, support and celebrate the talents of young people. The Union has developed its relationship with Youth Music Theatre UK over a number of years”