Tony Macaulay is a bestselling author, leadership consultant, peacebuilder, broadcaster and suicide prevention advocate from Northern Ireland. He was raised at the top of the Shankill Road in West Belfast at the start of thirty-five years of “The Troubles” in Northern Ireland, an experience that has shaped his life.

He has spent the past 30 years working to build peace and reconciliation at home and abroad, working with hundreds of youth and community groups to break down barriers of mistrust, hatred and division. He has applied his experience and learning into leadership development and management of change and transition in many voluntary, public and private sector organisations.

Tony has written three ‘coming of age’ memoirs a, Paperboy (2011), Breadboy (2013) and All Growed Up (2014). His fourth memoir ‘Little House on the Peace Line’ (2017) tells the story of how he lived and worked on the peace line in North Belfast in the 1980s. He has performed book readings at a range of respected literary festivals including: Aspects Literature Festival, Edinburgh Book Fringe, Belfast Book Festival, Dublin Book Festival, 4 Corners Festival and Féile an Phobail. He has been a guest literary speaker at the Celtic Cultural Alliance, IrishFest Milwaukee, Mediators Beyond Borders (Los Angeles), Maryland Irish Festival and the Chicago IBAM (Irish Books, Art & Music) Festival. In 2012 the W.B. Yeats Society of New York invited Tony to present a reading of Paperboy in the National Arts Club as part of the 1st Irish Festival. He is now a regular speaker on Northern Ireland, peace building and creative writing at universities and colleges in the USA.

As a prominent writer, journalist and broadcaster, Tony has contributed to NVTV, BBC Radio 4, BBC Radio 2, Downtown Radio and BBC Radio Ulster. He writes for the Belfast Telegraph, the newspaper he once delivered. In 2016 Tony was asked to present the Duke of Edinburgh Gold Awards to young people from Northern Ireland on behalf of HRH The Duke of Edinburgh. 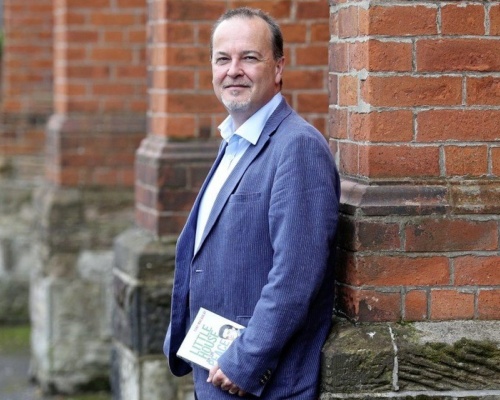