Gerard McBurney is a composer, writer and deviser, working in theatre, radio, television and the concert hall. Recent projects have included collaborations with Sir Mark Elder and the Hallé, including The Madness of an Extraordinary Plan (Manchester International Festival, 2011), as well as with the Southbank and Barbican Centres in London, Lincoln Center in New York, the Lucerne Festival, and orchestras including the Los Angeles Philharmonic, the New York Philharmonic, the Philadelphia Orchestra and others.

Between 2006 and 2016 he was Artistic Programming Advisor at the Chicago Symphony Orchestra, where he was also Creative Director of Beyond the Score®, a series of 30 live multimedia explorations of orchestral masterworks which have been performed by orchestras around the world. The CSO’s filmed versions of Beyond the Score have received more than half a million online page views by visitors from more than 50 different countries. For the Chicago Symphony Orchestra and Esa-Pekka Salonen in 2015 he created semi-stagings of Debussy’s Pelléas et Mélisande and Ravel’s L’enfant et les sortilèges.

In theatre, he has had a long involvement with Complicite, the acclaimed company of his brother Simon McBurney, as well as producing scores for the National Theatre, Lyric Hammersmith and others. For television, he has collaborated on more than 20 documentary films, most directed by Barrie Gavin. He has written and presented well over a hundred programmes for BBC Radio 3, including many episodes of the series Discovering Music.

He is known for completions of lost and forgotten pieces by Shostakovich including the music-hall show Hypothetically Murdered and the unfinished satirical opera Orango. Among his own compositions are Desire (Sir Mark Elder and BCMG, 1997) Letter to Paradise (BBC Proms, 1998), and Cherry Cottage 1782 (Berkshire Festival in Massachussetts, 2013).

Upcoming projects include working with his brother Simon on a new production of The Rake’s Progress (Aix Festival, July 2017), a staging of The Genesis Suite with Sir Simon Rattle and the London Symphony Orchestra (Barbican Centre, January 2018) and a new collaboration with the San Diego Symphony. He is currently Creative Partner for the 2017 Cincinnati May Festival, where he is directing productions of Mendelssohn’s Midsummer Night’s Dream and Elgar’s The Dream of Gerontius. 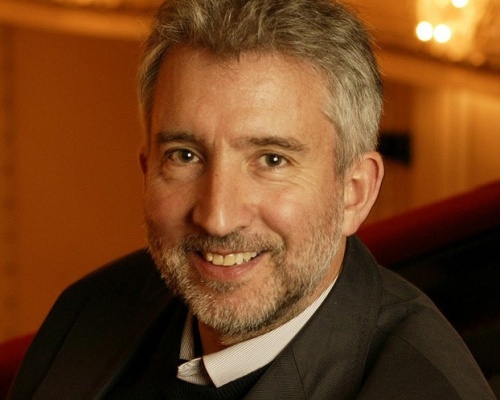