The Worst Wedding Ever - Review by Alice Wordsworth

The Worst Wedding Ever has the audience in fits from the start. Before even entering the auditorium a live band in the foyer creates a light-humoured atmosphere setting the scene for the evening. It then transpires that the band would be masking the scene changes throughout the performance and the songs cleverly entwined with the plot and on each appearance they would emerge from another area of the stage; even bursting out of the garden shed at one point! They enable the upbeat atmosphere to be maintained throughout the production and meant the audience were constantly entertained.

Chris Chibnall is the highly accredited writer of this production, having also written ITV's hit drama Broadchurch. It is the exquisite script that enables you to feel relaxed and at ease, with no forced jokes having you squirming in your seat.

Chibnall plays on stereotypical family traits, which cause the audience to erupt with laughter because the family often found themselves in dilemmas all-too familiar! Nevertheless, towards the end of the play a more sincere tone is adopted and very current issues began to appear, such as gay marriage and the ever rising costs of marriage. The script has you laughing because of its witty content, yet simultaneously feeling the characters’ pain.

The beautiful naturalistic set is a treat for the eyes and built on the naturalistic family environment the script played on, again successful as it drew the humour closer to our familiar.

It goes without saying that it's the skill in the actor’s delivery of these humorous lines that had you laughing in your seat. Carolyn Pickles who plays Liz, the mother, captures the fussy, interfering nature of her character, whilst Rebecca Oldfield, who plays Alison, has the audience in stitches after her incident in the porterloo!  However, some accents are not sustained  it is easy to fall into the trap of over-exaggerating your character with comedy and occasionally this is the case, meaning the naturalism is lost, which actually was where the true comedy lay.

Nevertheless, The Worst Wedding Ever is a superb production, with a brilliant cast and beautifully sculpted script.

The Worst Wedding Ever is playing at the Salisbury Playhouse until 19 April 2014. All the info is here: http://salisburyplayhouse.com/page/worst-wedding-ever 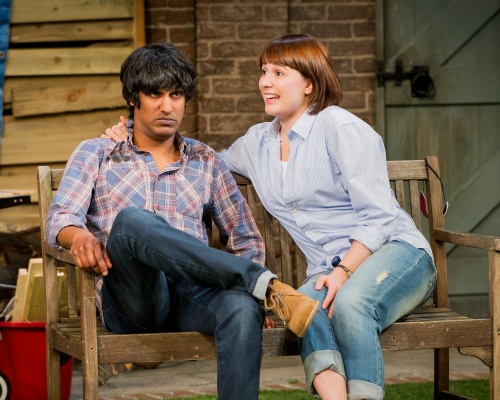