Émile Zola’s 1867 novel is drastically re-imagined by Nona Shepphard and Craig Adams at the Finborough Theatre with breathtaking brilliance.

The story centres on a young woman, Thérèse Raquin (Julie Atherton), who’s stuck in a life of misery and disappointment. Forced by her aunt (Tara Hugo) to marry her cousin Camille (Jeremy Legat), Thérèse begins a lustful affair with Camille’s schoolfriend Laurent (Ben Lewis). After drowning Camille on a boating trip, Thérèse and Laurent are consumed by guilt and we see their relationship, now fuelled by torment and hate, slowly reach its inevitable end.

Thérèse Raquin is a truly remarkable piece of theatre. This dark, brutal exploration of the animalistic tendencies of human nature is brought to life by Craig Adams’ complex score, which wonderfully utilises haunting melodies and rich harmonies to pack an emotional punch.

The musical unpredictability is striking: sharp, unnerving dissonance is followed by sensual harmonies from the 'River Women' that are reminiscent of something more accustomed to Destiny's Child. (Spine-tinglingly brilliant.) It's remarkably effective and, for me, the little runs and riffs give a story rooted in 19th-century Paris a hint of modernity and a new lease of life.

Refreshingly, there isn't the typical '11 o'clock number' that we're all so used to, that's not what Thérèse Raquin is about. It's an ensemble piece that deals with the social constraints of the 19th century, highlighted by the mundane, almost robotic, life of Thérèse's contemporaries.

It's a far cry from the naturalistic ethos of Zola's work, but Shepphard's book captures his scientific tone nevertheless with physiological references woven throughout: the piece opens with the ensemble singing, “Blood and nerves/Blood and nerves" (serving as just one of many possible examples).

Laura Cordery's design evokes the murky backstreets of 19th-century Paris whilst also conveying the blandness of Thérèse's life. Dark wooden beams fill the small acting space, littered with secret spaces for the cast to meander through. Shepphard's production could perhaps be sharper as things seem to wander in the second act, however this is me actively looking for something to criticise - it's a near-perfect piece of storytelling.

It must be said that the talent on show is phenomenal with the cast working seamlessly to bring this story to life. Atherton's turn in the title role is captivating. She doesn't speak for the majority for the first act, but she doesn't need to. Her eyes convey the pain and stifling boredom more than any words could. Furthermore, her frustration and claustrophobia resonate on a personal level as anyone who has moved back home after university can relate to the suffocation and yearning for freedom so felt by Thérèse.

Tara Hugo's heartbreaking portrayal as the well-intentioned but deeply selfish aunt is stunning. Although Hugo is perhaps not the strongest singer, there's enough emotion and depth in her performance for it not to matter; the image of her paralysed in a chair, vacantly staring out over the audience is chilling. Ben Lewis and Jeremy Legat are both consummate performers, the former being the rugged alpha-male with a powerhouse of a voice and the latter providing a great deal of humour.

Quite simply, Thérèse Raquin is fantastic. Emotive, powerful and dark, a must-see.

Thérèse Raquin will transfer from the Finborough to the Park Theatre from Wednesday 30 July to 24 August, 2014. Buy your tickets here: http://www.parktheatre.co.uk/ 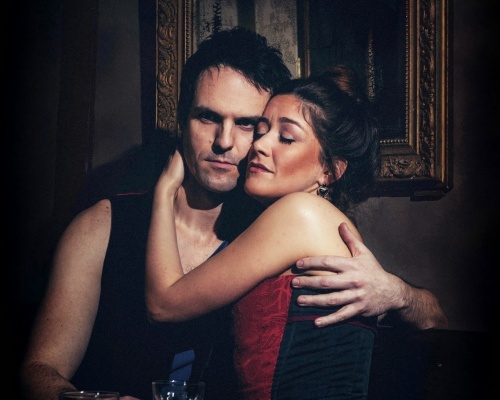