Thumbs up for this production!

There has been so much work and effort put into the production and it shows how committed the three actors are, especially as they play variety of characters! The transitions of each scene are clever and smooth by using clips of relevant and period music. The show is on the last leg of its tour and I can say I have not laughed so much.

It appeals to all audiences as it's a fun-filled comedic play, written by John Godber, and it is mainly targeted to young students aged 15+ due to its use of explicit language.

The performance is very Brechtian in style as the actors use small pieces of costume, accents and body language to transform into different a characters. Everything is distinctive and the production has a brilliant message at the end when Salty expresses to Mrs Parry about how the world doesn't care and how he can't have another chance at school because he's only just realised the importance of a good education.

The play starts and ends on a high. The blend of serious and comical characters keeps the play on its tiptoes and therefore there's never a moment when the show feels flat. Trupele Dorgu, Peter McMillan, and Amy Thompson have such brilliant focus and motivation, which helps them achieve their quick changes in characters, and quick wit, which has a great impact on the audience.

This is a DEFINITE MUST SEE! It is a brilliant interpretation of the play and I recommend anyone to see it if they have the chance!

Teechers is playing at the Lowry, Manchester until Saturday 3 May, 2014. 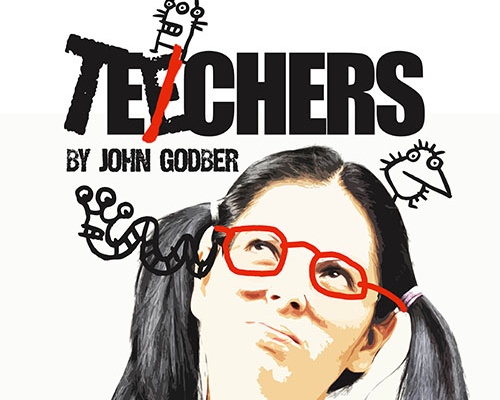