In a new version by Anya Reiss, Frank Wedekind’s controversial play of teenage angst is brought bang up to date by the supremely successful theatre company, Headlong. Written around 1890 (but first performed in 1906), Spring Awakening was last seen in London in its musical form at the Novello Theatre in 2009. Reiss’ play utilises webcams and a killer soundtrack in this truly Brechtian piece.

The story follows a group of teenagers as they deal with all the horrors of adolescence. Written in reaction to the increasing rates of teenage suicide due to a lack of education around adolescence in late 19th-Century Germany, Wedekind’s original is tinged with sadness and frustration.

Reiss’ adaptation doesn’t quite hit the mark when it comes to representing this and instead feels rather superficial in its reliance upon technical tricks and projections. At times it feels as if it’s trying to be too clever, ultimately leading to a sense of pretentiousness.

This is partly down to the Brechtian nature of the piece – a style that I am not convinced entirely works with hard-hitting subject matters. The copious amounts of breaking character can be confusing to audiences unfamiliar with this style.

Young audiences will love it, and rightly so, for this is truly boundary-pushing theatre. However, for me, it lacks the emotional punch of Duncan Sheik’s musical version and focuses too much on trying to be clever.

Spring Awakening is currently on a UK Tour. http://headlong.co.uk/work/spring-awakening/ 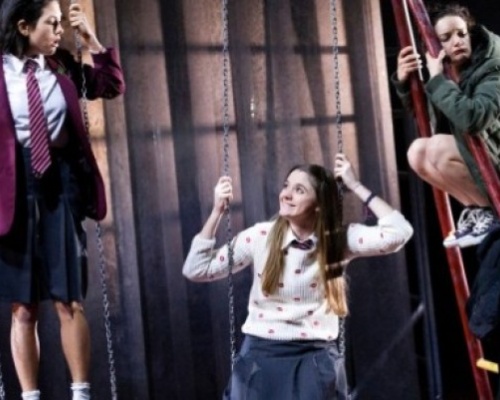