Rebecca Lenkiewicz's adaptation of Miss Julie (originally written by August Strindberg) proves to be intense, intriguing and volatile. Rosalie Craig brilliantly portrays the eccentric, temperamental and demanding Miss Julie, daughter of the Count of the Manor house, (previously played by Maggie Smith at the Chichester Festival Theatre). Between her terrible tantrums, Craig shows the dangerous uncertainty of her own self worth. This comes to light  as Jean (Sean Evans), a valet, takes full advantage as their forbidden love affair leads to the couple unable to continue living in the Count's manor house. Their plan to move to Northern Italy to run a hotel seems their only way of escape. Meanwhile, Kristen (Emma Handy), the cook, observes the madness of the situation, being the voice of reason and aptly shows the struggle the lower class.

Director, Jamie Glover, previously credited as an actor at CFT proves to know exactly how to please the audience as the Farm Workers' drunken dance was equally bawdy as it was a refreshing relief from the complications between Miss Julie and Jean's conflicting intentions.

The entire cast performed wonderfully and as the relationship between Miss Julie and Jean is at the core of the performance, both Craig and Evans should be credited for such a strong performance. Between Miss Julie's tantrums she shows how insecure and unsure she is of her own self worth as her submissive attitude toward Jean allows him to take full advantage of her. The chemistry between the actors was fascinating. A very strong performance by both the cast and creative team.

Following Peter Shaffer's prior success of Black Comedy at Chichester Festival Theatre, Director Jamie Glover, provides a fantastic evening where I left totally exhausted after laughing so hard for the entire performance. Glover's Black Comedy is the best comedy I have seen as I was continually laughing like a hyena throughout and close to tears on many occasions.

The stage is set in Brindsley Miller's (Paul Ready) apartment in mid 1960s South Kensington. When suddenly an electrical fuse blows and the characters are set in complete darkness. Glover had obviously spent a vast amount of time making sure the cast were realistically lost in the dark which each cast member did tremendously.

Ready's performance as Brindsley was fantastically hectic and a flawlessly terrible host at his cocktail party. As Brindsley awaits a millionaire, George Bamberger (Samuel Dutton) to arrive to purchase one of Brindsley's sculptures. Brindsley also has to conceal antique furniture from which he stole from his neighbour; Harold Gorringe (Shaun Evans) who was brilliantly snooty. Brindsley's girlfriend Carol Melkett (Robyn Addison) had an impressive squeaky voice, which added one more element to her fabulous character. Brindsley's elderly neighbour, Miss Furnival (Marcia Warren), stood out with her brilliant random drunken rant which had me rolling in my seat.

I wish I could say each character stood out without rewriting another cliché but truthfully they all did, each cast member had such a strong comedic presence; all I can suggest is that it is a must-see! 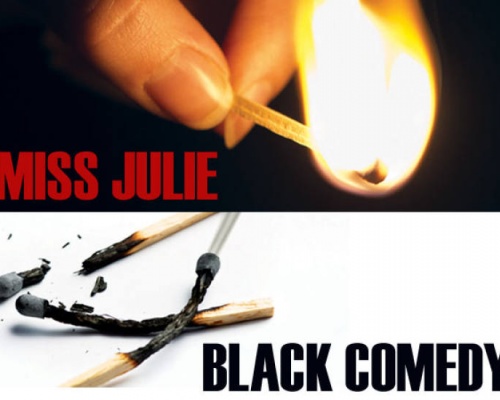