In The Heights - Review by Alice Clemens

In The Heights at the Southwark Playhouse is outstanding.

The production is an explosion of colour and fun. Under the direction of Luke Sheppard, the cast are incredible. The story follows Usnavi, played brilliantly by Sam Mackay, whose parents moved from the Dominican Republic to create a new life in Washington Heights, New York. The relatively sparse but colourful set is brought to life as the action unfolds and the audience meet the characters that impact on Usnavi’s life as they all struggle to make lives for themselves.

The hilariously sassy Daniela, who owns the local beauty salon, is portrayed perfectly by Victoria Hamilton-Barritt and has the entire audience in hysterics after every line or movement. With standout company numbers such as “Carnaval del Barrio” and “Alabanza” the infectious, Latin-infused music, written by Lin-Manuel Miranda, isn’t a genre typically heard in musical theatre and that’s what makes it so refreshing.

The entire production is so full of energy and it's so obvious that the cast are loving it as much as the audience. It feels so honest and that is down to the passion that every member of the cast clearly has for this musical. I thoroughly enjoyed the show, as did the rest of the audience who made it clear as we leapt to our feet during the blackout before the music had even ended!

The vocals are flawless, Drew McOnie’s fast-paced choreography is perfectly executed and I’ve already booked tickets to see it again. This is a production that is NOT to be missed!

In The Heights is playing at the Southwark Playhouse until 7 June. Buy your tickets here: http://southwarkplayhouse.co.uk/index.php/the-large/in-the-heights/ 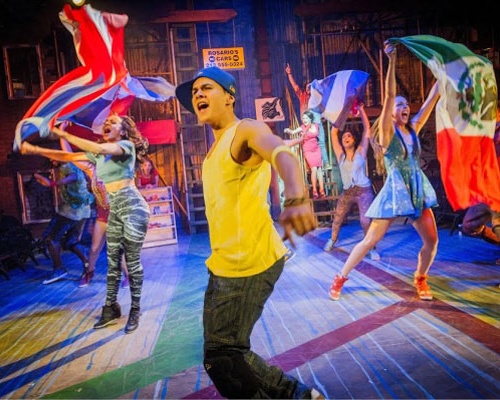