Ivan Turgenev’s 1862 novel was adapted by renowned Irish playwright Brian Friel and premiered at the National Theatre in 1987. Now it’s been revived at the Donmar Warehouse under the direction of the acclaimed Lyndsey Turner.

Fathers and Sons deals with generational difference and radical political philosophies in late nineteenth-century Russia, namely nihilism (the rejection of all religious and moral principles). We follow Arkady (Joshua James) who has returned home after graduating along with friend Bazarov (Seth Numrich). Their newfound beliefs cause tension within the house – particularly with Arkady’s uncle Pavel (Tim McMullan) – as they begin their quest to ‘revolutionise’ Russia. Arkady and Bazarov soon begin to question their own beliefs when they each fall in love with sisters Katya (Phoebe Sparrow) and Anna (Elaine Cassidy) respectively.

At first, Numrich’s Bazarov is irritatingly arrogant and his cockiness soon becomes overbearing. However, as we see his inner-turmoil bubble to the surface, his descent is inescapably touching. James’ Arkady has similar glimpses of greatness, but is a little melodramatic at times.

Overall, this is an interesting production that examines humanity’s longing to be loved both in a romantic sense and a familial sense. There are highly-impressive design elements from Rob Howell and the ensemble work brilliantly together.

Fathers and Sons is playing at the Donmar Warehouse until 26 July. Book your tickets here: http://www.donmarwarehouse.com 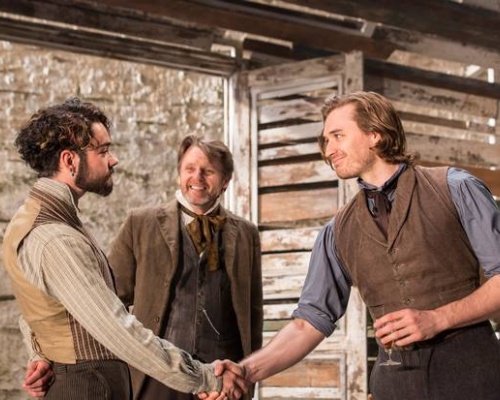