Arriving at the Grand Opera House in York on Monday night, I felt as though I’d stumbled across a weird sort of time warp. Dozens of middle-aged couples and large groups of friends dressed up to the nines and swathed in large red feather boas (yes, even the men) filled the auditorium. 20th Century Boy is a musical inspired by the life of rock legend Marc Bolan and his band T-Rex, and the majority of the audience had no doubt experienced the story of the outrageously-dressed Glam Rocker the first time around.

The story unfolds through the narration from both the characters of Bolan and his son, Rolan, who was only two years old when his father died in a car accident in 1977. We learn that the boy who aspired to be “bigger than Elvis” achieved a string of great classic hits, suffered a breakdown of his marriage, alienated many of those close to him, fathered a son from his  relationship with his former backing singer, Gloria Jones, and eventually died after a drink-fuelled celebration of his forthcoming 30th birthday. His now grown-up son travels from Los Angeles to London to discover the story behind the father he never knew, and meets many of the characters who played a key part in Bolan’s life.

The cast is strong, particularly Warren Sollars in the title role who certainly looks and sounds the part. Strong voices and performances also come from Katia Sarenti playing Helen Shapiro and Lucy Sinclair playing Bolan’s wife, June Child. Credit must go to both Donna Hines who played the part of Gloria in the first act, and to a seamless transition into the role by understudy Lakesha Cammock in the second act.

The overall energy of the show is good, but does seem to flag when the songs stop, and the dialogue takes over, particularly in the second act. The first act has almost the atmosphere of a rock concert rather than a selection of songs in a musical, and, if I wasn’t around to appreciate them in the seventies, I certainly recognised hit after hit as coming from the Billy Elliot film soundtrack ("Ride a White Swan", "Born to Boogie", "Children of the Revolution" amongst others).

This lively musical certainly delighted an audience who gave it a standing (or bopping) ovation on Monday night, and will no doubt have many of those recently introduced to the music for the first time reaching for their I pads to see what they missed – feather boas and glitter optional. 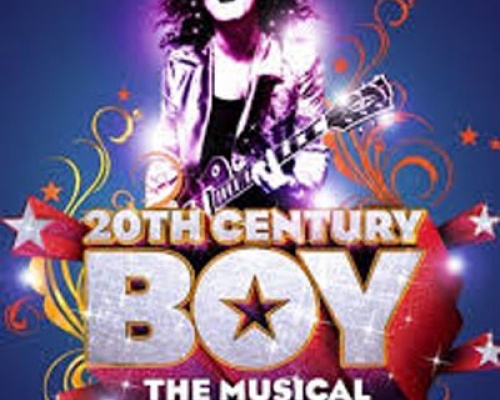