Kander & Ebb’s original style is undoubtedly present in this lively new show. Narrating the story through a ‘Minstrel Show’ format is a witty concept, similarly seen in Cabaret - a show within a show. This allows African American actors to play white roles, therefore reversing the stereotypes of the period and adding a comedy element. The show is based on the true story of 9 young African American men, ‘The Scottsboro boys’, from Southern America, aged 13-19, who are wrongly accused of raping two white women, aged 17 and 21. The show follows their fight for the truth along with the help of renowned lawyer, Samuel Leibowitz.

The initial energy of the talented, passionate cast is uplifting, yet the depth of the struggle for this historical turning point is always present, in the homely, Young Vic Theatre. But the storyline starts too quickly as the characters are not introduced, as much as I’d like, before the incident, making some connections difficult. I also feel the ending is rather abrupt, meaning the audience don’t have time to truly absorb what has happened to the innocent men. And, make what you will of the mysterious woman, whose identity is revealed only in the last scene.

On the other hand, the lighting and set work sophisticatedly together to create a realistic, rustic feel, along with the help of charismatic and truthful performances from all the actors. The use of chairs is fun, as such common objects are used so creatively throughout the show. All in all, I would thoroughly recommend the show to people of all ages as the show is enjoyable at all levels, whether it be for the inventiveness, comedy, law or historical element. I believe it is a powerful story of injustice that should be shared.

The Scottsboro Boys is currently playing at the Garrick Theatre, London - book your tickets now: http://garrick.londontheatres.co.uk/ 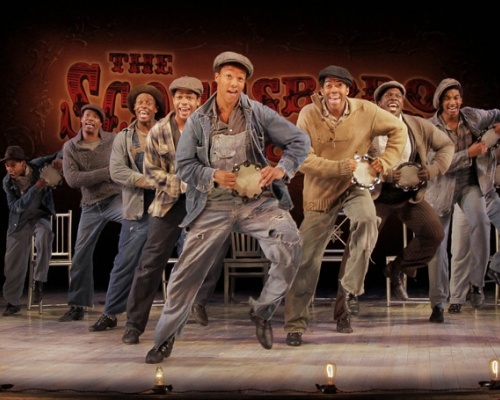