“Thanks to the bursary scheme, I was given a chance that I would never have been able to partake in due to financial circumstances and I wish that many other young people will be able to have this experience, especially if they have a passion for the performing arts.” Tarique, 16, from Birmingham, performed in A Teenage Opera, 2017.

BYMT’s bursary scheme provides access for young people to receive the highest quality training in musical theatre skills from top industry professionals; enabling people from all backgrounds the opportunity to go on and fulfil their dreams of a career on the stage. BYMT offers a bursary of up to 75% for participants to take part in one of eight summer production projects, this includes: full-board accommodation on a residential production, tuition and pastoral care, and production costs at the venue. The BYMT bursary scheme is means tested and available for any young person whose household income is less than £40,000 per annum.

Over 30% of BYMT’s participants every year are awarded bursaries this enables them to join the company and develop their skills. BYMT’s participant Tarique, 16, from Birmingham, received a Bursary in 2017 to take part in the world premiere of A Teenage Opera directed by one of the West End’s foremost leading ladies, Julie Atherton (Avenue Q, Mama Mia).

During my first time on BYMT, I was involved in A Teenage Opera, and suffice to say, it is an experience I won’t be forgetting any time soon! I can remember arriving on the first day, not really knowing anyone there, I am usually quite reserved and find it difficult to talk to people, but soon I managed to find my feet and started to enjoy the experience.

“I realized just how much effort goes into professional shows”

On the first week, I worked hard like nothing I had done before had prepared me for it. The final week was where I realized just how much effort goes into professional shows, not just from the cast but also from the technical crew and the directors.

“The shows left everyone with a sense of euphoria”

I was most excited on show week as it was a very different scene to what I am used to, but the shows left everyone with a sense of euphoria, myself included, each performance getting better than the last. Then came the final show, where a new family, formed within weeks, were split up in moments. Everyone was hugging and enjoying their last moments together, even marking the occasion with a group photo with the script and music writers. The creative team were incredible; they were approachable very supportive with the participants.

“When I went for my audition, I was going into it with no clue as to what they wanted us to do”

I applied for BYMT after my GCSE English teacher recommended it to me as I was fond of the performing arts and I saw it as a chance to experience what the industry is like and how it operates. When I went for my audition, I was going into it with no clue as to what they wanted us to do, but after the team introduced themselves, it put me at ease so that I could sing, act and dance. It seemed daunting at the time but, now that I reflect upon it, it was a chance that I may not get again. BYMT is a great opportunity for those who have a passion for the performing arts and I would recommend that young people go and audition as they have nothing to lose and a lot of experience and memories to gain.

“It seemed daunting at the time but, now that I reflect upon it, it was a chance that I may not get again”

“As far as tips go, don’t stress too much about the audition”

I would say that, as far as tips go, don’t stress too much about the audition; it’s about doing what you’re best at and knowing that everyone else in the room also has an interest in performing as well. Also, don’t worry about being completely rejected, BYMT will offer every participant at least a spot on a skills course that will help to improve your abilities and skills to bring the best out of you for both your strengths and weaknesses.

“Imagine that the audience is on the toilet!”

As a final note: I remember being sat in rehearsals with the director, Julie Atherson, and she gave us a piece of advice that I still remember, even now. She told us that, on stage, you will feel uncomfortable, as though there a thousand eyes watching you, but all that you can do is imagine that the audience is on the toilet! It sounds weird, but if you imagine the audience is as uncomfortable as you feel, then you start to think that they aren’t really paying attention to you and that you’re doing another dress rehearsal. Once you start to imagine it, you’ll feel more at ease and in a better position to perform and put on a show.

An experience like BYMT is unique opportunity. Just take it in your stride and embrace it!

BYMT National Auditions 2019 are taking place all across the country from 26 January to 24 February. BOOK NOW and take advantage of this fantastic opportunity to train with leading theatre professionals. 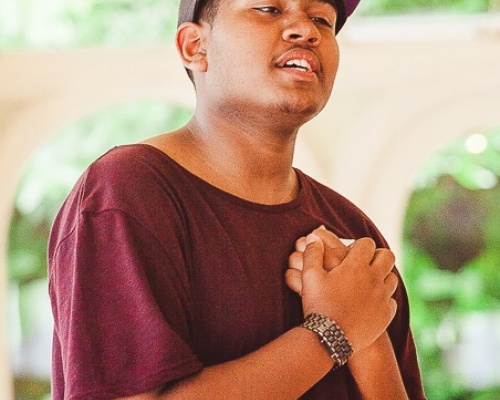