(Don't forget to check out Part 1 and Part 2 to see what we got up to in our earlier years!)

In 2014 we saw the origins of all our stunning dance theatre projects with the first Dance Connection show, choreographed by the incredible Rachel Birch-Lawson at the Barbican Theatre Plymouth. Later developed into 'Sweat Factory', the original Dance Connection was an all-female show that used breathtaking choreography and vocal soundscapes to explore the lives of women working within a difficult, dangerous and mechanistic world. Across the country in Aberdeen, the inspirational Lewis Barfoot directed Harvest Fire; a devised production based on a combination of the Burning Man festival and Burns Night, described by Joe Riley (one of our company members) as a "bold, exciting, energetic and emotional new piece of theatre". We also in 2014 launched the Triptych programme where we specifically commissioned work from young female composers, selected from an international competition, to create a triad of three short performances inspired by the work of Belfast's Poet Laureate, Sinéad Morrissey that were performed at The MAC, Belfast.

The YMTO Concert at The Lyric, Hammersmith was a massive highlight for us in 2015. Compèred by the inimitable Pete Gallagher and featuring a choir of our alumni as well as West End favourites Kerry Ellis and Stephen Rahman-Hughes, the night showcased a number of wonderful musicians who had come together to form our first ever full orchestra. There were a lot of stand-out numbers throughout the night, but one of our favourites was when the whole cast and orchestra came together to perform One Day More from Les Miserables; recent alumni singing lead roles opposite the West End veterans, and the orchestra giving it full force to bring the song to a joyeous and spectacular climax.
Also of note in 2015: Macbeth came back for its fourth performance, joining Mort in the top spot for most revived show, and we broadcast our first ever livestreamed production with FAGIN at South Hill Park Arts Centre.

In 2016 we premiered our third musical by the dynamic writing duo James Bourne and Elliot Davis in the form of What I Go To School For – the Busted Musical. With audiences travelling from across the country eagerly anticipating the show’s opening, our cast certainly didn’t disappoint, taking to the Theatre Royal Brighton stage with an energy and “rambunctious charm it’s difficult not to warm to” (Exeunt Magazine).
We also held our first week-long development workshop this year, for A Teenage Opera. Featuring a cast of alumni and a children’s chorus from within the current company, songs were learnt in record time (including some stunning harmonies courtesy of MD Michael Bradley) and the show semi-staged at the Lyceum Theatre for a select audience of industry guests including Mark Wirtz himself (who wrote the original music) and some of the “Grocer Jack kids” from the 1967 recording.

2017 came around and it was time for A Teenage Opera to be seen publicly – 50 years in the making, the original concept for the show told the tales of characters like Grocer Jack, Auntie Mary, and Sam the Steam Train Driver. Combined with additional lyrics and script by Pete Gallagher, and direction by Julie Atherton, the show finally made it to the stage with its world premiere at South Hill Park Arts Centre.
2017 also saw the resurrection of a few of our own older shows – Jabberwocky returned after a six year hiatus, as well as Tess of the D’Urbervilles from 2012 and Gulliver’s Travels from 2015.

And that brings us to this year. We kicked off with a bang, bringing Loserville in Concert to the Garrick Theatre in memory of Lil Chris (who starred in the West End production), raising money in joint support of the Maytree Respite Centre and our Bursary Scheme. This was a truly special event that reunited the original West End company alongside some of our own alumni for a dynamic and emotive performance in honour of this important cause.
Easter season at The Other Palace saw us restage our 2017 productions of Jabberwocky and Tess of the D’Urbervilles. After a super short rehearsal period with many cast members having to take on additional roles and learn new music, we opened to fantastic reviews and Jabberwocky even received their own cartoon penguin mascots courtesy of West End Penguins. Our Summer season likewise was as ambitious as ever - Paperboy in Belfast, for example, sold out for every show before we even made it to a rehearsal room, to the point we had to add two extra performances (that likewise sold out!).

So, after all that.. what’s next? Well, 2019 sees Peter Pan back with a vengeance, determined to thwart that dastardly Macbeth and naïve young Mort and claim the title of most performed show. We are also bringing back two more of our most popular productions with revivals of both 2016’s Fight Like A Girl and 2018’s Paperboy. But in the long-run? There are lots of exciting plans in development to grow bigger than ever and spread our musical wings to brand new corners of the theatre world. So make sure to keep an eye out. Here’s to the next 15 years! 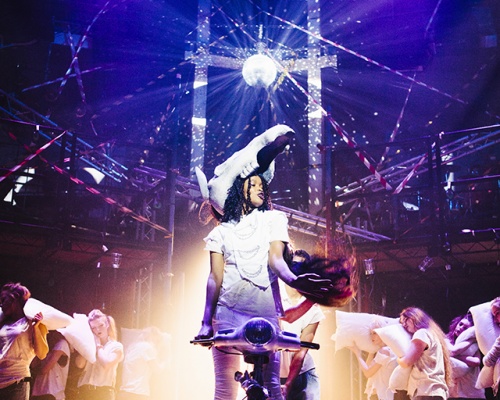