(Want to know what happened in our first five years? Check out Part One HERE)

2009 was another bumper year with some of our most ambitious shows so far. However, we would be remiss to talk about our 15 year history without a mention of one of the other key events for all of our productions – the infamous cabaret night! Always a night of hidden talents and mischievous frivolity, 2009 was not one to disappoint on the anecdotes. The Chosen Room cast’s night was going swimmingly for example until it was ambushed by a rousing flashmob of The Lion King. Likewise, the According to Brian Haw cabaret would be etched on the cast and staff’s memories for years to come thanks to the efforts of six of the male cast members. Led by future The Tailormade performer Jack Frimston, the sextet adapted Chicago’s Cell Block Tango (complete with appropriate costume) to create a cheeky retelling of some of their adventures on the project.
Come December-time, everyone once again rocked up in force to Let It Snow. The According to Brian Haw cast spent their lunch break in Parliament Square singing ‘Here On The Pavement’ to the man himself, whilst the Peter Pan team likewise ran back and forth across the city to juggle Let It Snow rehearsals with preparations for their London premiere at The Bridewell Theatre.

2010 saw Peter Pan draw neck and neck with Frankenstein for three total productions, while the Dummy Tree beat records for our smallest cast with only eight performers treading the boards at the Tristan Bates Theatre in Covent Garden including the delightful future West End performer Kayleigh McKnight in the leading role of the young mother.

2011 had us reaching for the stars with our production of Out There starring performers like Luke Bayer (Everybody’s Talking About Jamie) and Amara Okereke (currently starring as Cosette in the West End’s Les Mis), we had a company first with our production of Korczak where our stunning young cast of performers were joined on stage by veteran West End performer Peter Straker in the role of Janusz Korczak himself, and we also saw the first ever version of our musical adaptation of Macbeth by Garth McConaghie and Stuart Harvey. Originally developed in Bradford before a transfer to London in October, Macbeth from the get-go was a very ambitious project for us. Never ones to shy away from a challenge, this show saw the cast and creatives tackle questions such as "how do you make realistic fake blood that's not too slippy to dance on?", and "is it possible to play the cello whilst singing a chamber opera vocal line and executing a basic hip hop dance step?" (a question that thanks to the talents of performer Eleanor Toms received a resounding 'yes' in response).

For a musical about Death, Mort sure has been resurrected a lot. 2012 saw it beat Frankenstein and Peter Pan’s joint record with its 4th incarnation, at The Rose Theatre, Kingston. Unfortunately however, 2012 also saw the demise of one of our long-standing cast members. It seemed very fitting that Terry Pratchett, adorned in a spectacular top hat that was the envy of all at our Mort VIP night, was there to wave off Derek (the skeleton puppet and King of our Hearts). Survived by his ever-loving wife Roseanna Auckland (cast of Mort 2011), Derek sadly lost his leg on one of his many travelling adventures and didn’t have the strength to hold on until surgery, so he was laid to rest in our store alongside his faithful horse Binky.
On a more cheerful note however, 2012 was also the year that one of our shows had its first professional outing, as Loserville made an appearance at the West Yorkshire Playhouse, featuring our own Richard Lowe as Lucas Lloyd, before transferring to the Garrick Theatre for a West End run!

2013 was our most ambitious year so far. Not only did it include nine fully-staged summer productions, it was also the year of our first ever film project ‘Vanishing Point’. Shooting on location in Plymouth and the surrounding areas, Vanishing Point, filmed in association with BAFTA-nominated digital media company Gamelab, told the story of young inventor/musician Pippa Piper and her band of followers. As well as director Ellie Jones, the cast received screen acting tips from Robert Parker (who ended up with a featured role in the film as the Mayor) such as where to place your eye line for a close up, and how to hit a mark whilst rapping and dancing!
Following Loserville’s success, 2013 also saw the professional voyage of another of our collaborations with James Bourne and Elliot Davis when Out There (first commissioned by us in 2011) had a professional reading at The Other Palace, London featuring the likes of Danielle Hope, Dave Willetts, and Sally Ann Triplett. 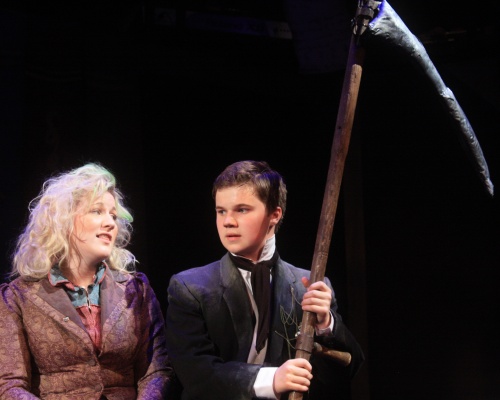