Wait, BYMT?? That’s right! It’s our 15th Birthday, and as a birthday present to ourselves, we’ve treated ourselves to a brand new name – British Youth Music Theatre! No longer will the alphabet relegate us to the end of the class register! More information on that is available HERE.

We at BYMT HQ are very excited to be celebrating 15 years on the stage so far, as well as our shiny new identity for the continuation of our music theatre journey. So, to celebrate properly, we thought we’d have a lookback on the last 15 years…

We may have only started small in 2004 with our summer season featuring just two shows (Amy’s Wedding and Over The Edge) but since day one we’ve prided ourselves on delivering innovative and interesting new music theatre, and we definitely didn’t shy away with these first two. Amy’s Wedding was an open air production about the struggles of Puritan emigration in the 17th and 18th centuries featuring performers such as Lucy Griffiths (Marion in BBC1’s Robin Hood / Nora in HBO’s True Blood) and Fiona Finsbury (Confidante (Il Muto) in Phantom of the Opera West End). Over The Edge on the other hand was an exploration of phobias and ‘the unknown’ developed by the brilliant Kath Burlinson, and featuring future West End talent such as James Gant, Jaygann Ayeh, and Drew Dillon.

2005 saw us head up to the Edinburgh Festival with our production of Goblin Market. The show ran for 21 performances where it was seen by over 2500 people and received many 4 and 5 star reviews. Other highlights of 2005 include Red Hunter – a jazz musical exploring the world of Joe McCarthy and the Red Scare, and Please Look At Me Now – a comic look at reality tv; the need for attention, the pleasure of watching, and the fun of pretending to be 'truthful', which featured future Funny Girl understudy Natasha Barnes.

In 2006 we really got our wings, with the first incarnation of some of our classic shows – namely Missing Melanie (as it was originally called before Mel had her name shortened; developed from the themes originally explored in Over The Edge) and Frankenstein. The Stones Are Hatching also returned for a second year; the first of our shows to have an official revival! Based on the book of the same name by Geraldine McCaughrean, and incorporating puppetry as well as traditional musical theatre, it told the fantastical story of a very large, very dangerous worm and the young people trying to make sure it didn’t wake up and wreak havoc!

2007 saw the return of Frankenstein, and the original production of Mort. Not wanting to focus our summer productions entirely on death and the afterlife, this year also contained shows like Grace Online that explored the virtual world of online sensation lonelygirl15, and Oh! Carol based on the music of Neil Sedaka. And of course, who could forget the high energy hilarity of Force 9 ½ where a young boy found to his growing horror that his whole life was turning into a musical? Now doesn’t that sound familiar?... 2018’s HELP! was in fact over eleven years in the making; taking its roots from Force 9 ½. There were some slight tweaks to the script though, such as the fact that the later reworking had sadly trimmed back on its humanoid trees…

On to 2008. The cast of The Chosen Room had us asking just Who Is Vicki Green? whilst over at Dead Heat it’s new instant celebrity Jayne that’s on everyone’s lips. With Mort mark 2, we caught the first glimpses of our favourite 8-foot skeleton Derek (RIP, we will always love you). And never ones to shy away from a cheeky bit of alliteration, Peter Pan and Pip Pirrip of Great Expectations also made their first appearances in 2008.
One of our arguably most successful shows from the year however was a one-night only performance which to this day remains as much of an enigma as the subject matter of the show itself, seemingly lost to time and faded memories (trust me – it took me over an hour to locate the cast’s secret recording on YouTube!). I am of course talking about our ever-loved Frankenstein spin off.
As all our BYMTers know, Let It Snow is a staple of the annual calendar – a time for our young people and creatives to reunite to celebrate the success of their projects; and 2008 was no exception for this. As our beloved Matt Brinkler affectionately pointed out however, this annual tradition did mean that the audiences of Let It Snow had potentially seen excerpts from Frankenstein just one too many times… So, following some stunning vocal work from Lizzie Karani and Harry Lockyear (in the roles of Elizabeth and Victor Frankenstein respectively), the cast took over the stage to present the jazzy spin off musical - “Mathilde Thoreau: the Super Spy of Geneva”, featuring the fabulous Katie Atkin. With a catchy hook and impressive riffing, they brought the house down with a performance that’s fondly talked about to this day.

Make sure to check out part 2 for some more of our favourite memories. 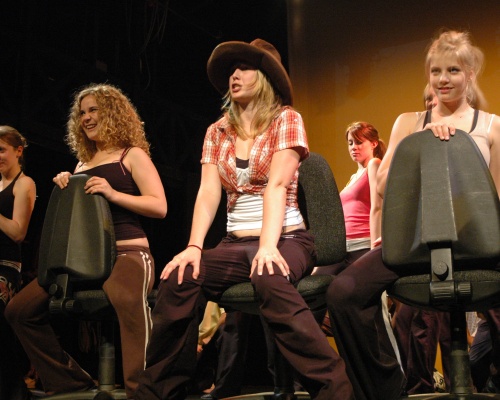