Imp Y Celyn and his ‘Band with Rocks In’ strut onto the Rose Kingston stage this weekend in BYMT’s melodic adaptation of Terry Pratchett’s novel Soul Music.

Members of this eclectic ensemble include:

The band’s guitarist, lead singer and only human member, although many other characters constantly comment that he looks a little “Elvish”. His name’s literal translation is "Bud of the holly".

The band’s troll percussionist. Whose technique, in typical troll fashion, consists of banging large rocks together. He later takes the name "Madonna", despite his colleagues' warning that no-one would last long in the music business with a name like that.

A dwarf who plays the horn, he’s not ashamed to admit he is in it for the money.

In honour of this eccentric cohorts BYMT would like to present its Top 5 Animal Musicians:

An aspiring alligator musician from the Louisiana bayou. A friendly yet neurotic companion for the main characters in The Princess and the Frog, Louis’ dream is to become human so he can join a jazz band. His name comes from the famous jazz artist Louis Armstrong.

Fun Fact: Louis is the first crocodilian character in a Disney film to be friendly in nature since Ben the dancing alligator from Fantasia.

Rowlf, the Muppet’s resident deadpan pianist. His first musical contribution to the show was ‘You and I and George’. According to Rowlf the song only sold two copies. One bought by him, the other bought by the eponymous George, who is depicted falling off a bride and drowning in the lyrics.

Fun Fact: Rowlf was actually the first true Muppet "star" as a recurring character on The Jimmy Dean Show, first appearing in a show telecast on September 19, 1963.

One of the most memorable adverts of the last few years, who could have guessed that this musical primate with a penchant for Phil Collins be so loved? After the success of the campaign and a heavy waxing session the gorilla went back to his roots and can now be found drumming for the Foo Fighters under the stage name ‘Dave Grohl’.

Fun Fact: When asked about the gorilla, Collins commented that "Not only is he a better drummer than me, he also has more hair”.

Free food, perfect balance and a talent for the trombone, just a few reasons this 70s Disney classic reminded us why “Everybody Wants to be a Cat”. Despite the occasional fur-ball caught in their trumpets this furry ensemble nevertheless curls up proudly on our No. 2 spot.

Fun Fact: Scat Cat was originally written with Louie Armstrong in mind, with his original name being Satchmo Cat.

Our No 1. Animal! The crazed drummer of Dr. Teeth and The Electric Mayhem, the fictional band from The Muppet Show. Spending many of his performances chained to his kit this musical maniac must often be reminded to beat, and not eat, his drums.

Fun Fact: Animal was the official mascot of the U.S. Ski Team during the 1998 Winter Olympics. He was also featured in one of eleven commemorative stamps issued by the U.S. Postal Service.

Join BYMT and our cacophony of monstrous musician at Terry Pratchett's Soul Music this weekend! 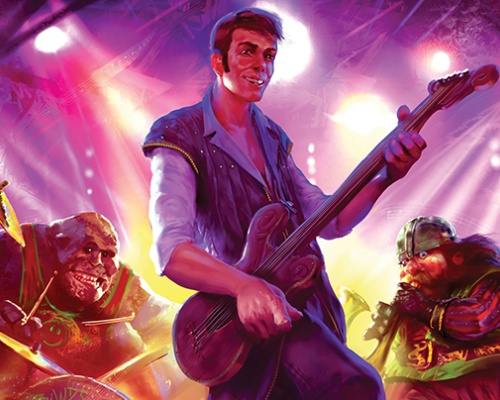