Last week was bursting with activity at Lyceum Theatre's Ambassador Lounge as BYMT produced the first rehearsed reading of A Teenage Opera to an invited audience. This ground-breaking work began its life in Abbey Road Studios in 1967, when composer Mark Wirtz penned what was to become the first rock opera concept album.

BYMT's Associate Producer, Matthew Johnson, talks to us about how it all went down

I packed the keyboard, music stands and amp into the back of an Uber.
“Where are we going?” asked my driver.
“To the Lyceum Theatre!”

This had been our office for the last week as we prepared our rehearsed reading. Our 20-strong cast had been given only four days to get a brand new musical off the page and in front of an invited audience of producers, agents and friends. The show is A Teenage Opera and it has been nearly 50-years in the making.

Michael Bradley, fresh from dilivering the musical direction for The Busted Musical: What I Go To School For, took the mixed cast of BYMT Alumni and young people through a speedy vocal warm-up. Meanwhile, Writer/Director, Pete Gallagher, made a few last-minute adaptations to his inspired new script.

Barely a few months earlier, Pete had come to BYMT with a vision for transforming the world’s first rock opera from a concept album to a fully-staged piece of music theatre ahead of its 50th Anniversary in 2017. Today, this new production was going to be heard for the first time.

Standing quietly next to the action was the man himself, Mark Wirtz – creator and composer of A Teenage Opera at the Abbey Road Studios back in 1967. He and his wife, Amanda, had flown all the way over from Atlanta, USA, to assist the massive transition from album to performance.

It wasn’t too long before the room filled with anticipation from an excited audience. Mark was joined by Keith West and the ‘Corona Kids’ – a well-overdue reunion of the voices from the original album. The lights dimmed, music blared, and the story of Grocer Jack in A Teenage Opera finally began. 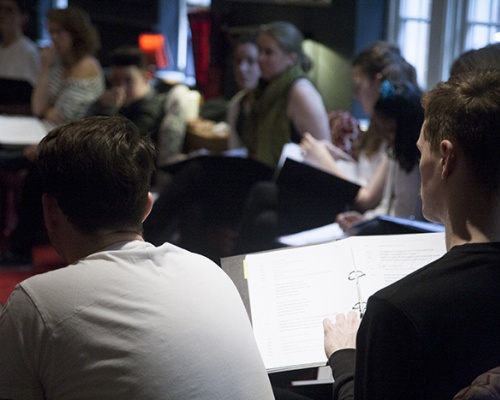