We're pleased to share with you the casting breakdown for BYMT's summer productions 2020!

GOBLIN MARKET - Two glorious mezzo soprano roles await successful auditionees this year in the forms of Lizzie and Laura, the two sisters in Goblin Market. Listen here to one track from our 2005 Edinburgh Festival production. Supported by the rich baritones of the Goblin King and Goblin Prince in Day by Day.  All four original performers are now in the industry: Bradley Jaden as Javert in Les Mis, James Gant at the RSC; Tara Wilcox as lead singer in The Wandering Hearts and Alana Kerr acting in California. The show offers a host of other roles and a wonderful ensemble of young people aged 11 up to 21.

CABARET MACABRE - Thirty older girls will be chosen for their inventiveness and ingenuity in our Cabaret Macabre, set in a seedy cabaret bar in dying days of the Weimar Republic. Opera singer and writer Jessica Walker and composer Joe Atkins will be devising this work which features “Joan of Arc” as the cross dressing emcee and her fellow cabaret stars drawn from the downtrodden, the ravished, the beaten and ignored women of history.

WHY THE WHALES CAME - On an entirely different note our slightly younger company members will be given the chance to recreate the wonderful world of Michael Morpurgo early and much loved novel Why the Whales Came. We are looking for a large company to populate the Scilly Islands township of Bryher at the start of the First World War. There are a host of characters and animals and birds to create involving teenagers from 11 years old to 17, playing both serious and comedy characters - from the town’s pensioners to the local seagulls! We look forward to the writer of Warhorse coming to see the show and approve it for further performances. More details about casting here.

PETER PAN – of course, we know all the characters – Pan, Hook, Smee, Lost Children, Tiger Lily, Tinkerbell, Pirates. It’s only fair to let a new company recreate the show again, our sixth time of presenting Jimmy Jewell and Nick Stimson’s wonderfully tuneful version. And what a delight to have Sarah Ingram back to direct for the second year running. It is also available to be licensed by other groups throughout the year – all the information is here.

DANCE CONNECTION 6 - Continuing our programme of contemporary dance-musicals create by leading choreographers we are looking for a troupe of highly motivated singer/dancers ready to take on the challenge of a completely new production. Internationally renowned choreographer Jo Meredith last worked with us on the dance musical #More in Common, reflecting on issues brought up by the death of MP Jo Cox. She is looking for a highly complex skillset requiring young performers with a natural aptitude for movement and strong voices, as well as a commitment to making new work on important themes.

BREADBOY - The second in our trilogy of Tony Macaulay’s memoirs to hit the stage, we are looking for a company drawn from across Ireland and Scotland with few English voices thrown in for good measure! The age range is slightly higher than for Paperboy as Tony has grown a couple of years and a few inches. The casting for Tony and all his 16 year old mates and girlfriends on the Shankill Road as they negotiate the bombs and bullets of the Troubles as well as auditioning for their own production of West Side Story. It’s the year of Grease and Saturday Night Fever so expect some classic disco dancing. We are looking for some outrageous comedy actors and actresses prepared to through everything at it!

THE NIGHT THE WAR ENDED - We are looking for the Future Queen of England! To celebrate the 75th Anniversary of the end of World War 2, we on the search for two young women to play the 19 year old future Queen Elizabeth and her sister the 15 year old Princess Margaret, on the night they went walkabout amongst the London crowds. In addition to the principal roles we are looking for a large cast of characters who will be supplemented by local performers to create the crowd scenes. We will be looking for a teenage company playing soldiers, airmen and women, WAAFs, and a host of other characters drawn from Martin Gilbert’s book The Day the War Ended. Lots of great actors please for both royals and the citizens of a war torn Europe.

Our National Auditions Tour will be visiting 19 cities across the UK and Ireland from 1 Feb - 23 Feb 2020. Auditions are open to absolutely anyone aged 11-21 and require no preparation: all the audition materials will be provided in the room. All participants in next summer’s productions will receive a Grade 8 Certificate from Trinity College London. AUDITIONS CAN BE BOOKED ONLINE HERE. 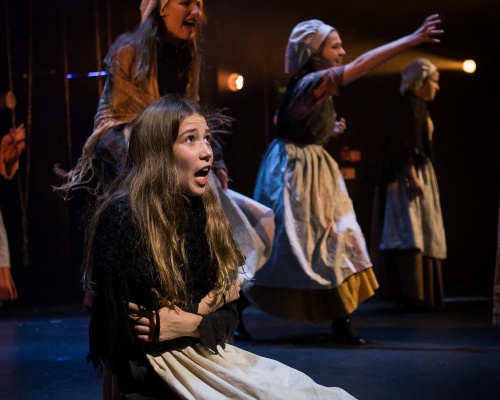